Cast Iron Cookware: Where it all begins

The beginning is always simple and intuitive;
a desire to create food that tastes so good you can’t help but smile
Deep in its simplicity; simple in its depth.
The key to making delicious food is a basic, sturdy iron pan.
Born from a return to the roots of OIGEN,
a company that has been devoted to making ironware since 1852.
Witness the moment heat draws out flavor!
Experience the proven benefits of cast iron with MALUTTO and SOLITTO. 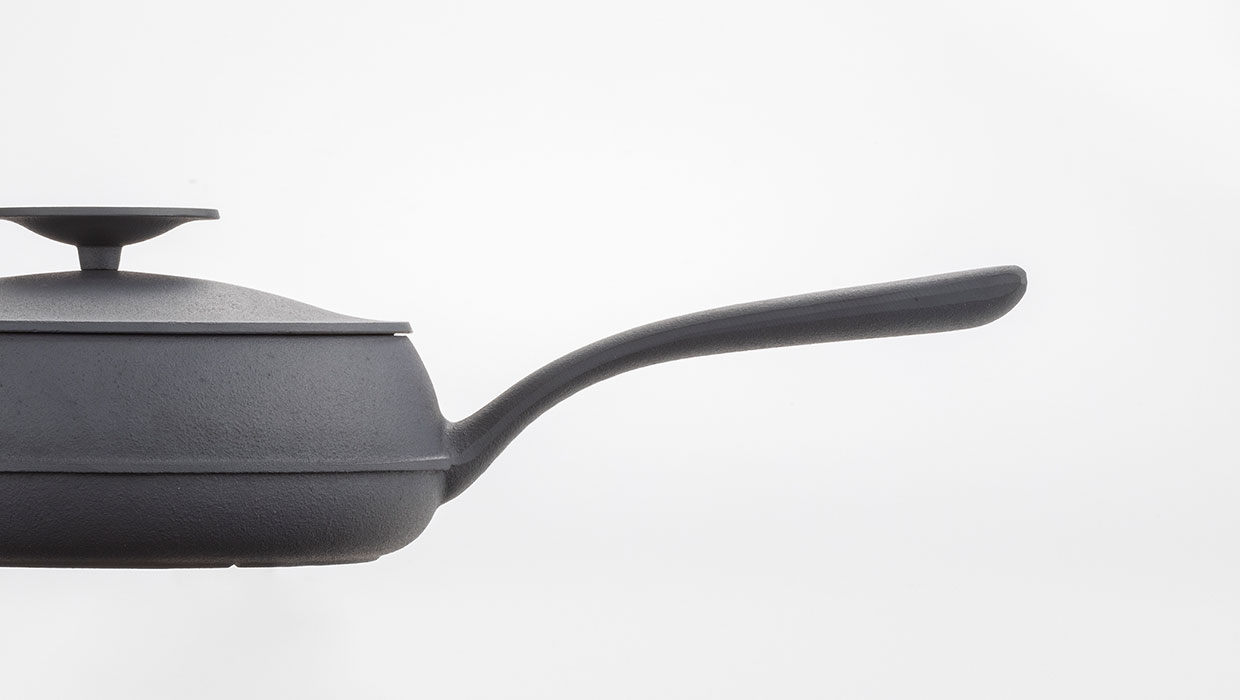 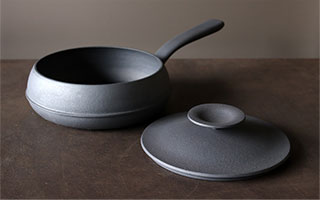 MALUTTO
The rotund shape reminiscent of a tetsubin kettle gently draws out flavors. 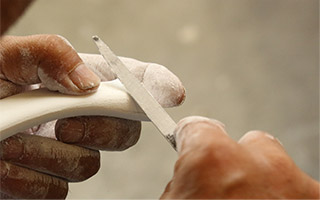 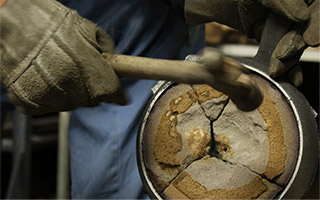 This beautiful and functional round shape is a culmination of 300-year-old iron kettle making techniques and knowledge passed down through the generations at OIGEN. The stout iron lid helps seal the goodness in. Charming, round MALUTTO is crafted to the highest standards, to satisfy the most demanding cooks. 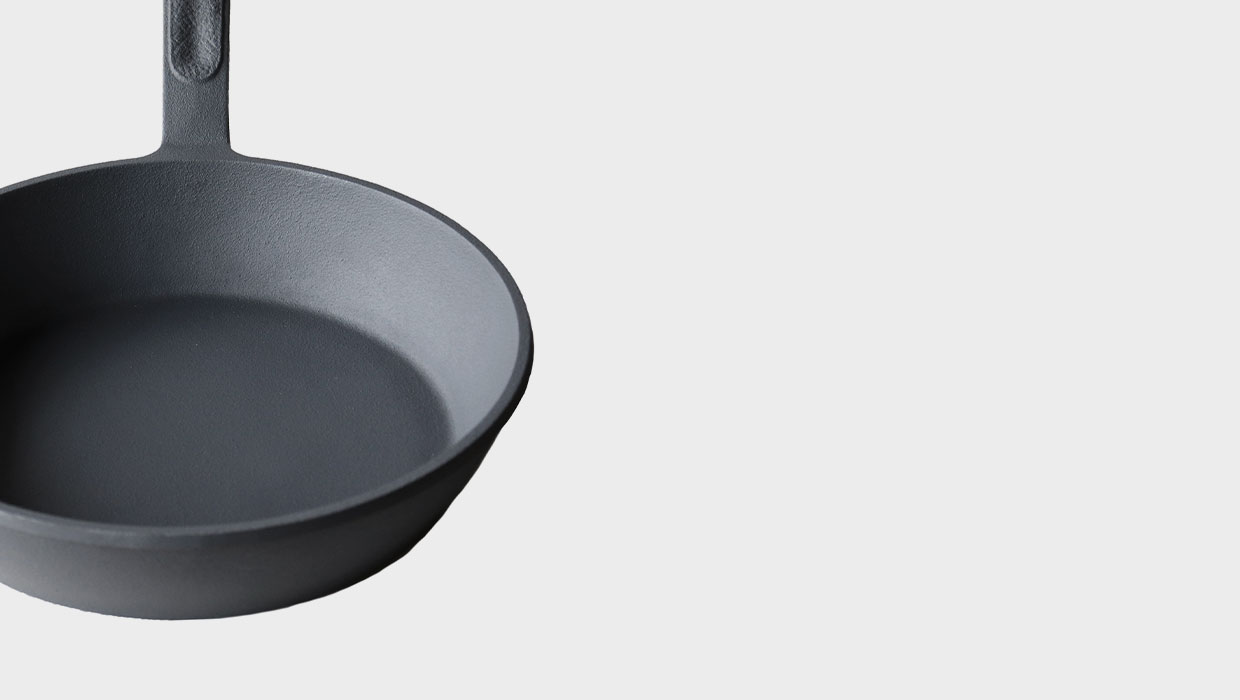 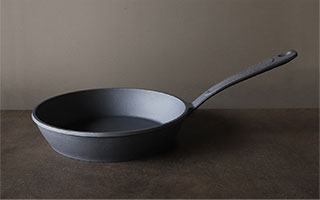 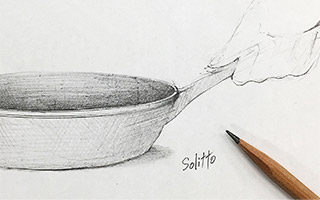 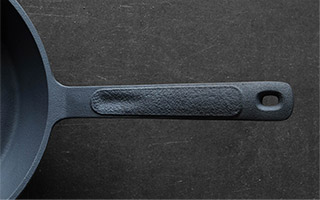 Special attention has been paid to the depth and angle of the sides and handle, specifically because they are a standard shape. We promise you all the benefits of cooking with cast iron pans. Grasp the handle and it instantly becomes an extension of your arm. The non-slip handle has a feel reminiscent of leather and gets more and more comfortable to hold with each use. Try placing your thumb on the dimple on the handle’s base; you will be able to carry and wash the heavy iron pan with ease. 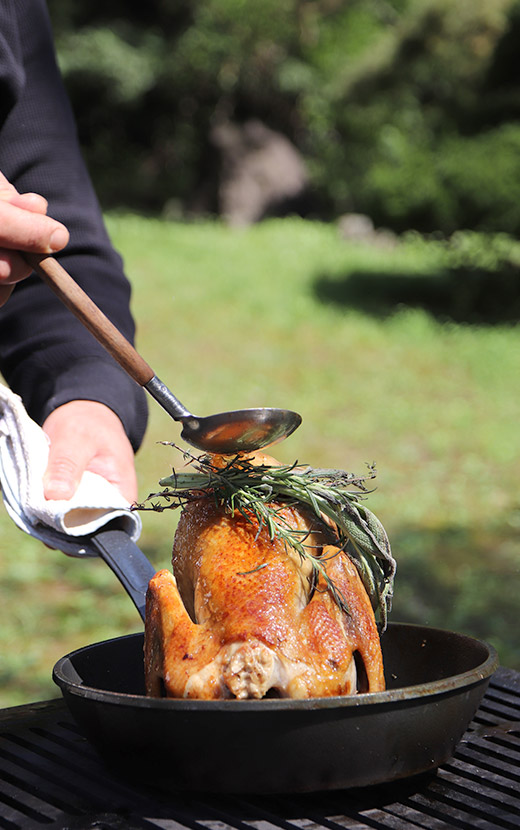 The usual process for roasting meat:

First you sear the meat either over direct flame or in a frying pan or hotplate. Next you cook it slowly in the oven, taking care to prevent the meat drying out. Finally, you remove it from the oven and let it rest on a plate or tray. Roasting meat well takes time, effort and a variety of equipment.

On the other hand,
with MALUTTO and SOLITTO,
a single pan can satisfy
your most demanding cooking needs.

Cook a big chunk of meat or large vegetables skin and all, with the lid on to seal in the flavor instantaneously. 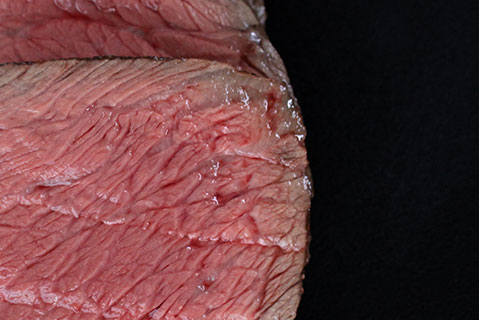 The typical thickness of cast iron enables cooking with both retained heat and radiant heat.

Great heat retention enables even and effective transfer of heat to the food. While cooking the exterior evenly, cast iron pans simultaneously heat from the inside, just as the sun warms your body from within, bringing out the best flavors of each ingredient. The unique ‘Naked Finish’ is shown to provide 2.5 times more radiant heat that untreated cast-iron*

Radiant heat is the delivery of heat to an object through electromagnetic waves.
* Based on in-house research 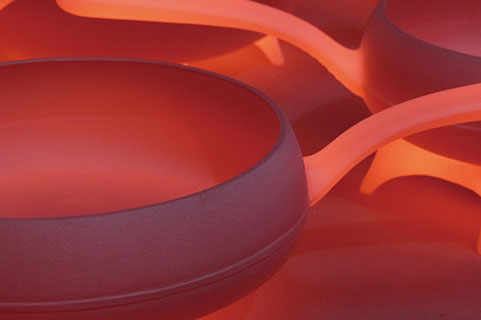 There is a taste only possible through precisely controlled heat with no layers of coating to block it.

The world-first ‘Naked Finish’ was developed by OIGEN in 2003. This revolutionary process protects pans from rust and enhances the cooking experience without the need for enamel or commonly used chemical-based synthetic coating.

Naked Finished cast-iron is free from the risks posed by artificial layers such as chipping, leeching, or emitting chemical smells when exposed to high heat or sudden changes in temperature.

MALUTTO-Designed to circulate heat and steam

Transfer heat gently and instantaneously.
The rotund shape of MALUTTO is full of surprises.

The stable heat provided by cast iron combined with the unique shape that traps heat make MALUTTO pans ideal for slow cooking. Circulating steam prevents food from drying out during the long cooking process, much like a steam convection oven. You’ll no doubt be surprised at how well this pan does the cooking for you. Once you’ve got the hang of steam cooking with the lid on, why not try cooking quickly on high heat?

Proven shape ensures the best use of heat

Tough enough to withstand high temperatures and retains heat well.
It proves its worth when you cut through the ingredients.

Burnt edges and raw in the middle… you’ll be free from the stress of cooking meat with retained heat slowly released, cooking to perfection. Brown the outside with high heat first, then turn off the heat and allow it to gently cook through to perfection. Deep sides accommodate a wide variety of uses.

One question led to the creation of
MALUTTO and SOLITTO

What can a pan do for a chef?

Cast ironware lets you communicate with food and see its reaction. I especially recommend it for young cooks. You can control the heat at your will, opening up a whole world of possibilities. Cast ironware does the cooking by itself for you!Katsuyasu Ito, L’aureole Tanohata
Ito said with a cheekily as he folded his arms with a satisfied look. In his hands, ingredients in an iron pan change as if by magic. After first encountering iron pans he immediately fell in love and began developing his own style of cooking, becoming a leader of food in Iwate. The words of Ito always give us encouragement.

There was none of the fancy equipment I used to have in my own kitchen. But I realized that as a professional chef, my most important tools are my own hands and simple fire.Jared Ingersoll
Ingersoll said, pointing at his right arm with a gentle smile.
Currently based in Sydney, Ingersoll is a leader of the Australian culinary scene who has long been devoted to sustainable procurement of ingredients, supporting small producers that share his passion for quality. Around 2011, he closed down all his restaurants to showcase his talents at events.

Do you know what makes good tasting food? Essentially there are only two factors. The first is ecologically chosen ingredients. The other is heat to alter the ingredients.Masayuki Okuda, Al Checciano
Okuda whispered this with a smile, as if revealing a family secret, as he sat next to one of our staff at a dinner party one night. He is a renowned chef responsible for such restaurants as the Yamagata Italian restaurant Al Che-cciano. Okuda spearheads the local gastronomy scene in Japan with this establishment of ‘regional revitalization through food’ at his home in the Shonai region of Yamagata Prefecture.

As a chef, our job is to make food taste better using heat.Sugio Yamaguchi, BOTANIQUE
Up-and-coming Japanese chef Sugio Yamaguchi disclosed to a staff member while visiting us at OIGEN recently. We had enlisted Yamaguchi to test some prototypes of our new pans which he immediately fell in love with, going so far as to say they had ‘changed his view of life’. Yamaguchi went to France when he was 23 years old and opened his own restaurant BOTANIQUE in Paris in 2015.